As we're unlikely to see terraces again at football, this is the virtual equivalent where you can chat to your hearts content about all football matters and, obviously, Arsenal in particular. This forum encourages all Gooners to visit and contribute so please keep it respectful, clean and topical.
Post Reply
96 posts

expensive goin 2 london .. in my case it was a wkd away so was fun and got 2 take her up the arse

Anyhow Rebel did you find out what games you got tickets for?

Maybe one weekend we can take our missus up the......

No no thats just wrong stop it!

sunderland match on oct 7,, arsenal sent us a list and then we pick r matches,, we got offered man city bolton and sunderland so few lads goin 2 man city match,, we r hopin for 20 tickets but will prob get 10, thats the norm,, ill head 2 the rocket after,, match i on at bloody 12 so big days drinkin 2 be had

Mostly though is there such a thing as a "Doris Park" where I can leave her when she gets on my nerves and then go pick her up several hours later when Im intoxicated? Did they include this facility during design

If they have a shoes section in the armoury you should be OK!

Take a tip from that Chel$ki (Watford) prick Lovejoy and remind yourself, Women and football dont work lol!!!!

Seriously my Mrs has been a gooner for years and it is great when she stands there abusing the opposition as much as the guys around us, just a shame she is due to give birth on 13th October so will have to go without her this season.

On the plus side though, I have another generation I can guide in the direction of all things Gooner!
Top

I gotta say she is from a fully fledged Gooner family!

She has cousins aunts uncles etc all with season tickets (no that not the only reason Im with her)!

Anyhow Im looking forward to it! Bring on Sunday!

i think we're starting to see a generation of women coming to the games that have been going since childhood, at the same time we're also seeing a generation of "metrosexual" men with their moisturisers and shit like that who know fuck all about football. just think that it's interesting that this ancient situation that ceasar is finding himself in may soon be happening in reverse as well, although i think woman gooners may not be able to use our catchphrase.
Top

I took my missus up the Arse on our wedding night and.... OOPS! Wrong website!!

No, seriously, I brought the Trouble over when she was just the "Mot" (girlfriend - Tom Farrell knows what I'm talking about). It was against Derby County in May 99.

She wanted to try and understand my love for the Gunners and experience a big match day so I brought her over with my mates (one of whom was also bringing his missus on a first trip over).

She was a bit intimidated at first. We were sat in the West Lower in the last row at the Clock End. The Derby fans were hurling alot of abuse at us and one arseh*le kept jumping up and offering us all outside after the game. Out of no where my ladylove jumped up and roared "F*ck off no mates!" at him. For about two seconds you could hear a pin drop and then everyone started chanting "F*ck off no mates! F*ck off no mates!" at the pleb. I couldn't believe it. First trip over and she only goes and starts a bleeding chant!!

I spent the whole second half with my hand up to the right side of my face waiting for a coin or a zippo to come hurling over!

My other lasting memory was when Anelka scored and the whole team ran over and celebrated right in front of us and my missus kept telling everyone in the pub afterwards that Kanu had waved at her personally...

It was a weekender with about ten Irish Gooners and a few of our English brothers and a couple of non footy London friends (hers) and it was a blast. She got in her Harrods trip on the Monday too.

Only when we got home did I realise how much more I had spent than a normal "lads only" trip over...

Still, she hated football before that trip and she is still not a football fan as such, but she loves the Gunners and she understands and encourages my obsession with them so it worked out well in the end.

She even understood my two day pilgimage to Paris last May. And she knew not to phone me after that game while I was drowning my sorrows in the Cockney Tavern in Pigale! And she gave me a great birthday present in 2002; she paid for me to fly over and get my photos taken in Highbury with the PL and FA Cup trophies.

The only thing is she's been over every other season since and those weekends are way more expensive than when I just go with the boys.

Oh, just a little aside; the team we put out that day against Derby was:

If I'm remembering the right game Parlour was outstanding that day and I think our erstwhile bench warmer Mart Poom was in goal for Derby.
Top

I find it sad that when we lament the loss of our legends no one ever includes the ever reliable Mart Poom.

How many goals did he concede in the CL last season?

Indeed!! In fact Mart Poom must be the only goalkeeper in football history to have a 100% clean sheet record in league games!! Played 1, Clean Sheets 1.

Don't forget Everton away in the league cup

In November 2003, he was selected by the Estonian Football Association as the country's greatest player of the last 50 years 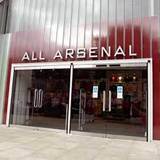 does anyone know if poom actully let a goal in while playing for arsenal 1st team ???
Top

Better stats than Seamo or Jenno or The Legend Bob Wilson.