Arsene Wenger - What Stage Are You At?

As we're unlikely to see terraces again at football, this is the virtual equivalent where you can chat to your hearts content about all football matters and, obviously, Arsenal in particular. This forum encourages all Gooners to visit and contribute so please keep it respectful, clean and topical.
Post Reply
190 posts

Arsene Wenger - What Stage Are You At?

1. He's the best manager around, look at what he's achieved, he's got a job for life.
2. We may have slipped a bit but he's still doing a good job with the resources he's got, he'll turn it round in time.
3. We're not doing well enough but given what he's done for the club and the circumstances I'm willing to give him another year.
4. I've still got respect for the man for what he's done but it's time he went quietly.
5. He needs to go at all costs, he's an embarrassment, ruining the legacy he worked so hard to create and more importantly poisoning the club.

I'm definitely at Stage 5, I'm amazed how many people are still stuck between stages 1-2.

I like that definition so much I'm going to set up a poll to see at what stage people are at.

What Stage Are You At?

With thanks to northbank123 for the idea - which of the 5 generally accepted positions on Arsene Wenger applies to you?
Top

I Hate Hleb wrote:..which of the 5 generally accepted positions on Arsene Wenger applies to you?

Its a difficult one because I still respect him for what he's acceived and I think I'll always respect him for the amazing times we had under him (no. 4) but at the same time think he needs to go right now at all costs (no. 5). 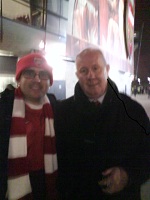 That interview is embarrassing
Top

SteveO 35 wrote:I haven't looked at any of the post match comments but please don't tell me he tripped out the one about the "30 years working in football"

There's a bloke who works for our local council that's been there for 40 years - doesn't make him any good !

SteveO - Watch the vid. It really does plumb the depths of arrogance and pure, pure contempt for fans.
I usually switch off for his post match stuff but this was apalling........

After a few glasses of vino later on mate, I might be able to summon up the effort to watch it

Given that the club chairman routinely abuses the supporters and defends his man to the hilt its hardly surprising is it. In the background he'd have been in discussions with Kroenke and Gazidis over a new deal - we all know its coming - so he has been afforded the rare luxury of a £7m per annum job where he is answerable to only man. When that one man gives him one objective i.e. make me money, then he probably feels everything else is incidental.

He works for a group of three people who couldn't give a shite what fans think. Take Gazidis, he promised the BSM a 'full review of ticketing arrangements' over a year ago. Given that all of their concerns still remain outstanding, he basically pays lip service to the concerns of fans. Hill Wood simply abuses us all and Kroenke says nothing at all. That's why I will not give this club a penny of my money all the while these jokers treat us with contempt
Top

5 for me, the longer he's allowed to continue the more damage he will do.
Top

Thanks for the vid...

'*You have a little bit Alzheimer''

To be fair, sitting there after the game and getting punched by a group of media guys (and the sun probably is not the highest quality footie magazine) is not what I would want. Also Wengers point is fair that they have written him and the team off last year and Arsenal managed to finish fourth. The squad is not built for competing for the title and hopefully Arsenal can reach the CL places again, but this year it looks like the competition is even more.

Does not change the fact that it looks from the outside that there are some structural issues within the club and the squad, again not wanted to piss anybody off

ive been stage 5 for last 3 seasons. really dont see the club ever going for the title again as long as wenger is still in charge.
Top

Option I would go for is missing for me, so went for 3.

I would want to keep with Wenger as it stands unless a can't give up opportunity presents itself as a potential long-term replacement (e.g. If Pep became available and wanted to come)
Top

When he let the 2004 Invincibles break up so quickly, I gave him credit for trying to build a new team for a new era. When he allowed the best team we have had since then to break up in the space of a year, then he convinced me he had lost it.

The defining moment for me was the end of 2008 collapse and the departures of Gilberto, Flamini and Diarra in quick succesion, which he then justified by signing Ramsey and Coquelin who we are still waiting to see the best of 4 years later.

The guy is a walking disaster - completely out of touch with the realities of PL and CL winning life in 2012.

In the same way GG failed to adapt to the modern day PL era of foreign imports and escalating salaries, AW has not adapted to the PL becoming a global game funded by super-rich overseas investors and owners. GG chose to stubbornly persist with old English style players, and AW has persisted with shopping trips to France to buy second raters in an attempt to stick two fingers up at everyone else who would almost 100% agree that you need at least 3 or 4 100k+ per week players to compete

Ferguson probably shudders at the thought of players earning 150k per week given his roots, but accepts that it is a necessary evil in order to compete. Wenger clings to some sort of moral judgement regardless of what it means for the team or the fans
Top

Definitely a 4 for me.

Well, actually I'm a 5 at this very moment, because I'm annoyed and disappointed with his arrogant, childish and disrespectful comments in the press conference yesterday, but that aside - I'm a 4. I respect the bloke for his past achievements, but it's clearly time he went at the end of the season. And if we win a domestic trophy, then it'll be a nice leaving present. It would change nothing.
Top