As we're unlikely to see terraces again at football, this is the virtual equivalent where you can chat to your hearts content about all football matters and, obviously, Arsenal in particular. This forum encourages all Gooners to visit and contribute so please keep it respectful, clean and topical.
Post Reply
580 posts

Well that was relatively painless.

Got myself block 131, albeit probably the very back row. Better than the first 10 rows anyway.
Top 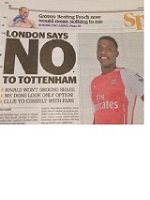 For the semi I was in Block 123 on the half way line which I thought would be a sedate area with little atmosphere...actually it was pretty good with loads of people standing and singing their hearts out.

Just booked the front of the upper tier for the final as it will probably be a bit more enjoyable for my dad.
Top

Given your earlier posts, was it coincidence that you just happened to get your tickets in the block most likely to be the singing section...

blocknineteen wrote:Hull have confirmed they have the same end for the final as the semi, therefore we will be in the same end...
As for singing sections, I could not care. It's a final ffs and all of us who are guaranteed tickets are regular at away games, so we all sing anyway.

In theory, yes. But to be guaranteed a ticket for the final you "just" need to be a season ticket holder with 3 or more away credits... And methinks there are many amongst that group who won't sing!

I was well away from the "singing section" for the semi and still made plenty of noise. But for the final...? Think I'd prefer to be amongst people who are likely to be regulars at away games and who realise that making noise and having a laugh are pre-requisites for a day at Wembley.

Not a loaded question, but are you saying red action singing sections are made up of largely away regulars? Most away regulars I know would not go anywhere or have anything to do with red action. Personally, I don't have an issue with them, I just don't agree with singing sections in general, but I do like and are grateful to them when they organise flag and card displays etc. Basically we are saying a large proportion of our fan base do not sing and there are many reasons for this..

So yea most away fan regulars all had planned to book in block 132 through talking on twitter and face book. We also got “Shewore” to help promote it.

Was basically like an away game but all regular faces all in same section.

All the same people have booked block 132 again so should be a good atmosphere. I booked 8 tickets just now – row 14 as the upper rows all sold out already
Top

That's the one to be in!

That's the one to be in!

When you see how much grey shaded area there is in the stadium, it just goes to show how fucking pathetic the FAs ticketing policy is, when you consider that Hull will have the same area as us at the other end.
Top

Got Block 133 row 36. now sweating on the second till the ballot !
Top