As we're unlikely to see terraces again at football, this is the virtual equivalent where you can chat to your hearts content about all football matters and, obviously, Arsenal in particular. This forum encourages all Gooners to visit and contribute so please keep it respectful, clean and topical.
Post Reply
163 posts

olgitgooner wrote:Wayne's very dear friend Steve aka Gus aka Percy has asked me to pass on these few words....

As you know by now your mate and mine Wayno has passed away. I don't know the full details but Wayne's life tragically came to an end on Friday evening.

Through the forum I got to know Wayno and I feel lucky and proud to call myself a mate of his. You will all know the laugh a minute, no holds barred and abrasive Mutley. Not all of you will know the generous, caring and wonderful husband and father of three children.

Wayno really was a one off and I best describe him as a 'force of nature'. How he combined the madness with so much love, compassion and generosity really was unique. You won't find another Wayno. They broke the mould, probably sensibly, when they made him.

I could list a hundred memories but a few that will stay with me forever are the New Years Eve our families spent together, camping with him and other friends and also the occasion he left the ground at half time so pissed he thought the game was done. We was 2-0 down at half time and it was only when he was half way home he found out we had won 3-2. The daft sod hadn't even noticed the Holloway Road was empty!

I've been thinking who will miss Wayno and I actually find it easier to list who won't so here they are:

Arsenal stewards or the 'hi-viz bastard spawn of Wenger gestapo' as he lovingly referred to them.

Curry house owners who suffered Wayno's love of ordering a meal and a drink and then leaving as soon as he had drunk the pint of Cobra. "We are just popping out for a fag" he would tell the waiters.

Arsene Wenger. I'd like to think he will miss being abused from the Clock End.

Anyhow, meeting to celebrate Wayne's life will be too complicated and too damn expensive. Can I suggest that next time you have a pint (or a cup of tea Augie) that you raise your glass, look to the sky and say "cheers Wayno". He will be up the causing mayhem with his old man and another friend Steve/Charlie!

My thoughts are with Zoe, Wayne's wonderful wife and his beautiful children Charlie, George and Freya.

I hope life is treating you all well and you never know we may meet again at The Arsenal one day soon.

There will be a pint on the bar for you both tonight Wayne and Steve my friends!

Beautiful and from the heart... RIP Wayne..Didn't know you but those that did obviously thought highly of you...
Top

Cheers for putting up the Steve/Gus Tribute. I remember the story where he left early. I think it was Bolton and a night game. Wayno told me his dad rang him later that evening and said ' we did well to come back' to which he replied 'what you on about we lost 2-0 !' His dad then explained to him that we were 2-0 down at half time and won 3-2 in the 2nd half. It then dawned on a sobering up Wayno that he'd left at half time and when his dad confirmed he must have he said ' I thought the tubes were empty !' Class.
R.I.P. Matey You always gave us a laugh and a lot of the time gave the mods a fright !!
Top

Cheers for that Steve/Gus . Very touching and from the heart. Rip Wayne .
Top

Didn't know him personally - other than a few choice postings on here.....

Sounds like a great character to have been around, with no doubt many funny stories / memories.

Condolences to his Gooner friends, and family.
Top

Condolences to his family and friends.
Top

My heartfelt condolences to all his friends and family; such terrible news.

Fuckssake can't believe this news, as DB said Wayno was certainly one of the guys that made the forum the totally unique, fresh and brilliantly bizarre place that we all held such sentiment for, and he would be big enough to apologise if he went overboard I still have one of his PM's in my inbox, nothin good lasts forever but surely taken too soon - RIP big un, and my condolences to your family, who must be absolutely devastated!!!
Top

Very sad news, he was a very funny guy.

Condolences to his family
Top

My memories of Wayno are many and mostly unprintable!

We went through a stage of major pisstakes on here years ago involving photoshopping, and Wayno could certainly dish it out - but he could always take it too and would often set himself up as the butt of a good joke. His banter with another of our former members, ds, was some of the funniest and most priceless stuff I've ever read on here.

I just feel heartbroken for his wife and kids. To lose such a wonderful dad so young is terrible.

rip and sincere condolences to his family

I know no one from here, but when I first joined mutleys post were one of the funny things that made this place much better than an ordinary forum.
Top

His avatar will be ingrained on my mind forever! You could never again unsee that.

Hard to believe that some so full of life is gone. And a memorable Avatar 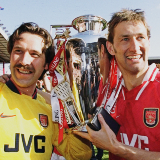